Most road accidents are rear-end collisions caused by distracted or inattentive drivers. For such accident scenarios vehicle manufacturer develop systems that warn the driver of an impending frontal collision and that assist the driver in the prevention. The maximum braking power of the vehicle is to be fully utilized, in some vehicles even if the driver does not brake itself. Such systems are grouped under the term "Autonomous Emergency Braking" (AEB). From 2014, the assessment of the AEB systems is included in the star rating from Euro NCAP, from 2016 the AEB pedestrian test will be included. 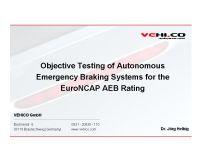 To test the AEB systems different accident scenarios has to be simulated with a test vehicle approaching a slower vehicle dummy (so-called "target"). The employed ADAC target is a special cushion, which is modeled by its appearance and its radar or lidar characteristics according to a real vehicle rear. Therefore it is detected by the AEB systems of the test vehicles as a real vehicle. The test vehicle can crash into the target, without causing any damage. The target may be used as a stationary obstacle. Moreover it is possible to pull the target with the help of the trailer coupling of a drawing vehicle in order to simulate end collisions with moving vehicles.

For a reproducible result, it is not only necessary that the velocities of each of the vehicles, the relative distance between the vehicles, the braking force of the test vehicle and the deceleration of the target are controlled precisely. In addition, it should be ensured during all tests, that the test and target vehicle always move on the same track in order that no lateral offset between the vehicles occurs. These conditions can only be fulfilled when both vehicles are driving automatically.

The recent EuroNCAP test specifications and the use of VEHICO robots for the testing was put in a nutshell by our CEO Dr. Helbig: "Objective Testing of Autonomous Emergency Braking Systems for the EuroNCAP AEB Rating". 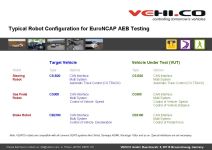 The described complex AEB tests can only be realized with the help of driving robots. The target and the test vehicles are equipt with a gas robot, brake robot and a steering robot. A typical configuration of VEHICO robots for EuroNCAP AEB testing is shown in the picture on the right.

The gas robot controls the vehicle speed and the relative distance between target and test vehicle. The brake robot in the test vehicle activates the brake pedal with a predefined braking action, while the brake robot is the target vehicle controls the deceleration of the target. Over the entire test duration the steering robots drive the vehicles along a predefined track. This ensures that the tested accident scenarios are always the same and that the test results are reproducible.